Automotive enthusiast with a passion for creating, engineering, and perfecting machined and 3D printed parts for the high performance world.

I am a motivated creator, with the want to design and build everything from simple machined parts, 3D printed prototypes, automotive performance and accessories. Please contact me if you wish to meet and discuss designs or 3D printing services

I began work with Cambria and moved to a new house where we had a Epilog Legend series 45watt laser cutter and engraver. For a while I was curious if the laser would etch and cut different materials, so I thought I would give it a try with some Cambria Quartz from work. I took a few samples home and began to experiment with it. At first I used painters tape since I read that usign it would produce sharper images and I found that I need really wide painters tape to do large objects, and the tape would catch fire sometimes. I also realized that overlapping tape would sometimes leak paint when I would paint the images I engraved with just regular model paint. Next I moved on to vinyl, like the stuff used in scrap booking. This worked phenomenally since I could buy large rolls of it and it would cover a large area and easy to remove without any fires.

Since these experiments I have been able to etch lots of stone and other materials and add color to the engravings as well.

Here are just a few that I have done for some friends at work: 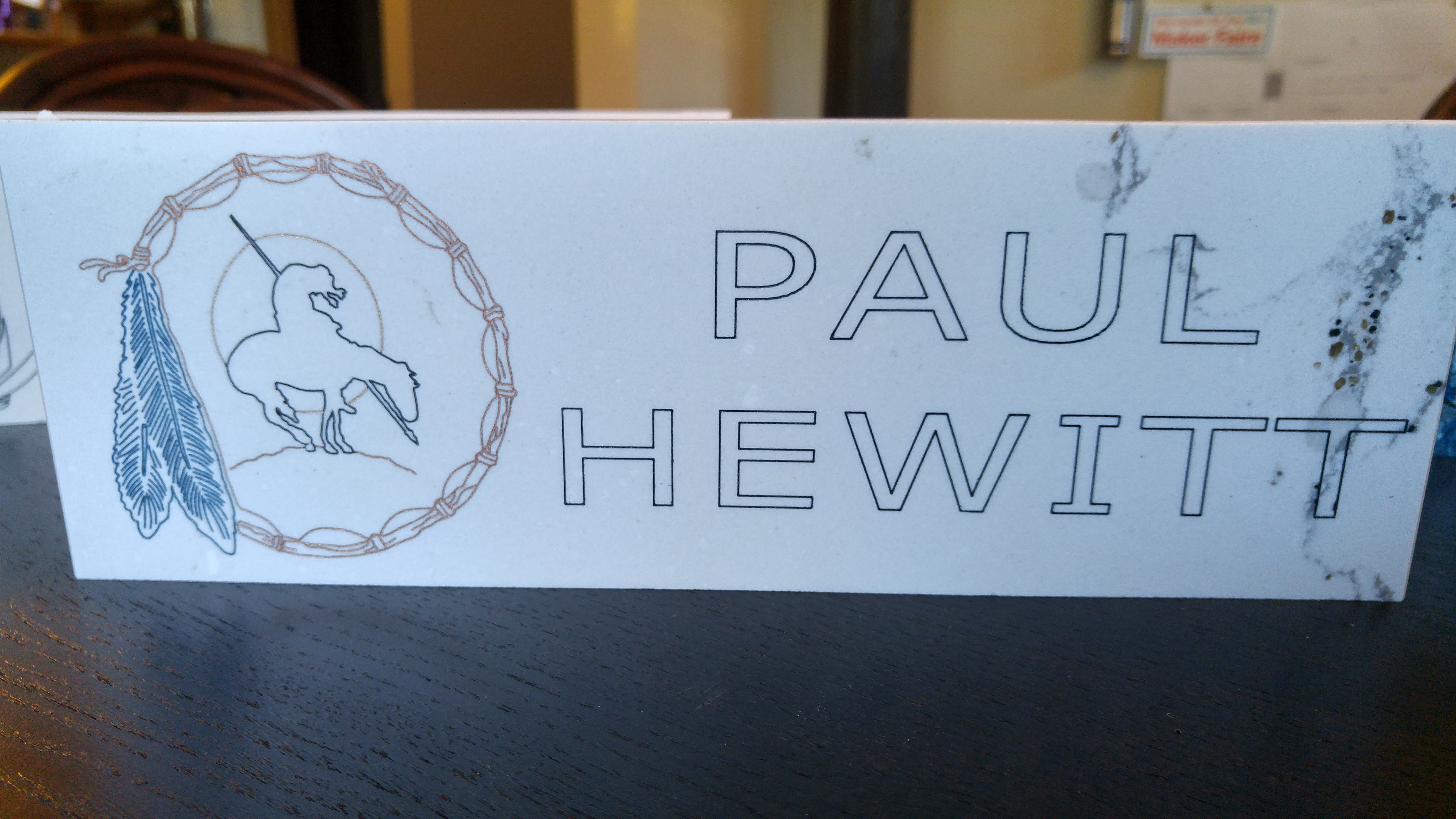 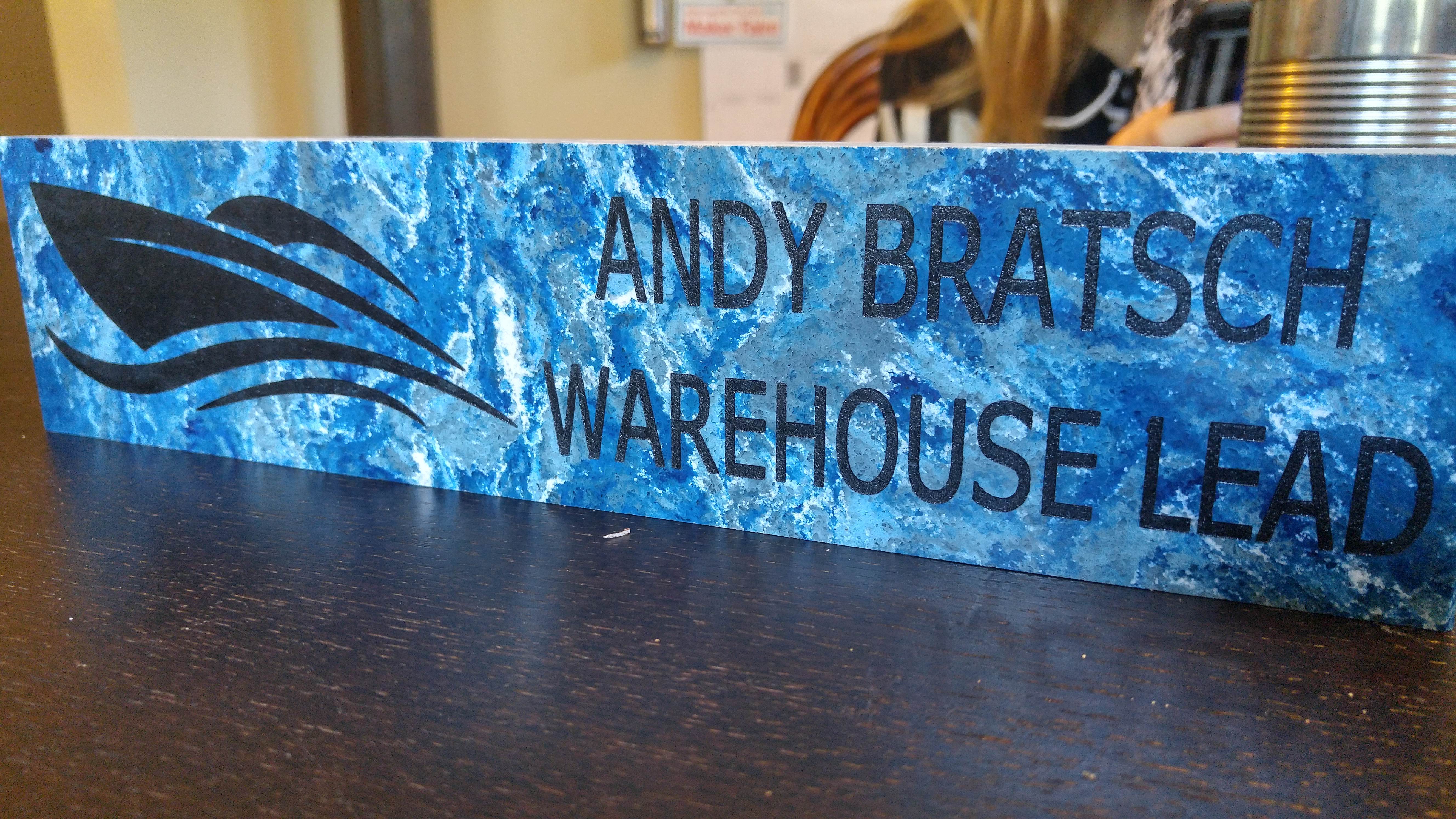 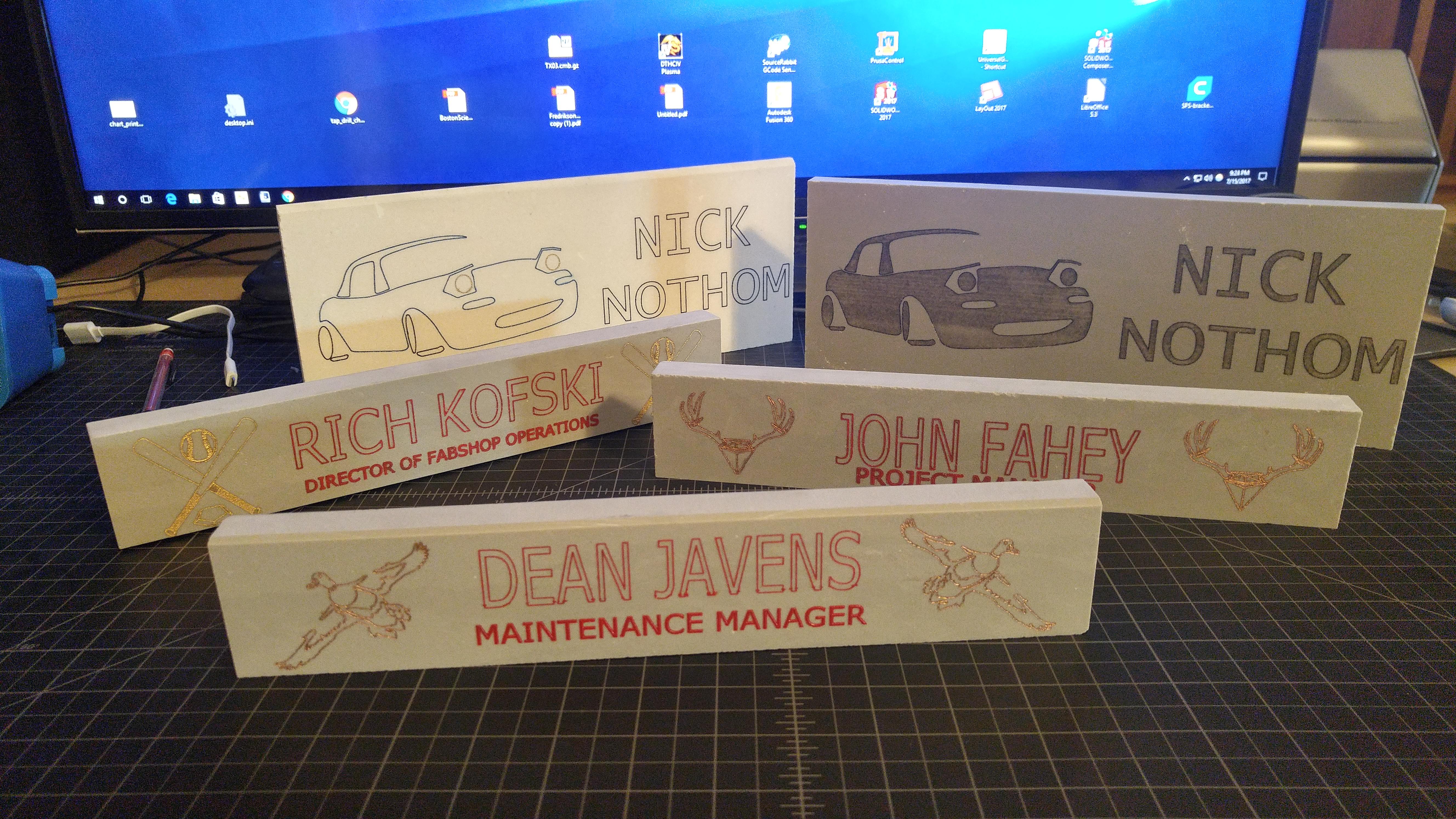 Here are some other things I have laser engraved as well: 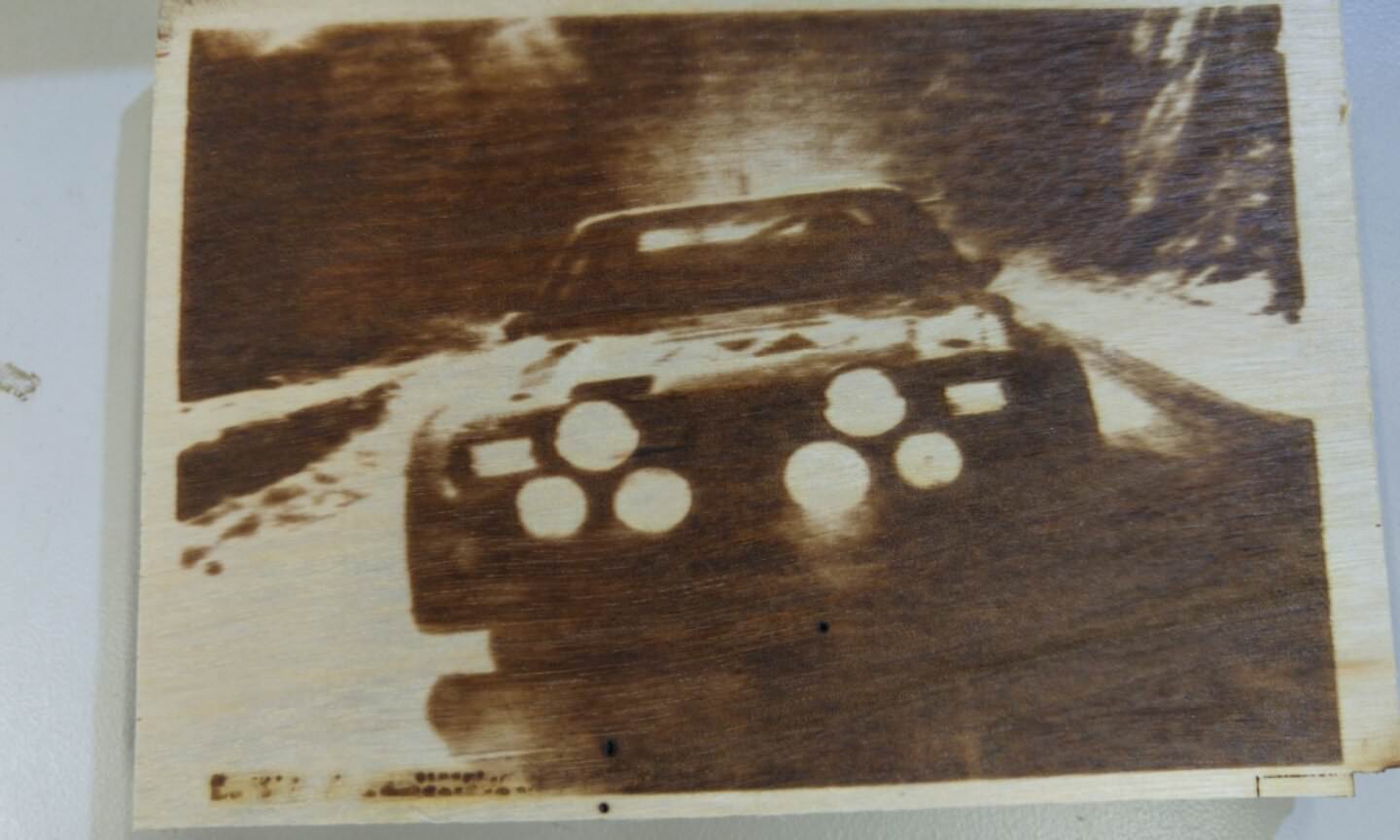 Here is a video of me doing a engraving for my roommate:

The purpose of this ongoing project was to begin learning about the abilities of a FFF 3D Printer. I use the Mono Price Maker Select V2 currently with an upgraded all aluminum carriage, Y-bracing, glass build plate, a upgraded cooling fan for the nozzle, and a x-axis belt tensioner. I have been working with various people to help them develop prototypes for their various projects ranging from the medical field to patenting specialized storage containers as pictured above. The next steps with the printer are to be able to develop useful parts for a automotive application, specifically a 2012 Subaru WRX. The use of ABS plastics and PETG to aid in structural durability and heat resistance will aid in the production of strong parts.

I purchased a used 1995 Honda CB500 Interceptor that had trouble idling and starting. The first steps I took were to de-rust the gas tank and fuel lines, to do this I emptied out all of the gas from the tank and the system. Next I took small plastic beads and some distilled water and vinegar and place them in the tank and shook the tank as much as I could, each time emptying the mixture and beads and repeating. Next I washed out all the fuel lines and replaced the dated fuel filter along with new fuel hose from the tank to the filter to the carbs. Once this was complete I was told that the carb boots were torn and not sealing well so I purchased new boots and installed them before re-installing the gas tank and fuel lines. Next I had a friend help me with starting the bike, we hooked up the bikes battery which was new to a trickle charger and began to crank the bike over listening for air leaks and looking for fuel leaks. We notices one of the seals on the carb bowls was leaking and disassembled the bike again to get the carb bowls off. Upon further inspection the carb bowls had multiple torn gaskets and needed replacement. Also upon inspection we noticed that there were clogged jets, I had to use a combination of WD40 and PB Blaster and a pair of vice grips to remove the jets, they were very stuck. I ordered new jets and got them installed as soon as my order of carb bowl gaskets arrived. Then we re-installed all of the parts and filled the bike with fresh gas and put in new spark plugs. We attempted to start the bike a few times without success, I adjusted the main idle screw a few times untill we got the bike to sound like it was trying to start. I finally found the right balance with idle and throttle to get the bike to start. After experimenting with the idle screw and getting the bike warmed up with a fresh oil change of course, the bike began to start on its own without throttle. It was cold out around 40*F, and I took the bike for a test drive, all it needed after that was new tires and it was ready to ride. After all the work I sold the bike since I had no need for it being in college.

I was tasked with creating a part out of a block of aluminum to a +-.001 spec for a friend of mine. It was a modified clamping block for converting a CNC plasma cutter to a CNC router. The block was made from 6061 T6 aluminum and required threded holes and countersunk holes for the piece to be flush all around.

Here is the finished piece with the bolts: 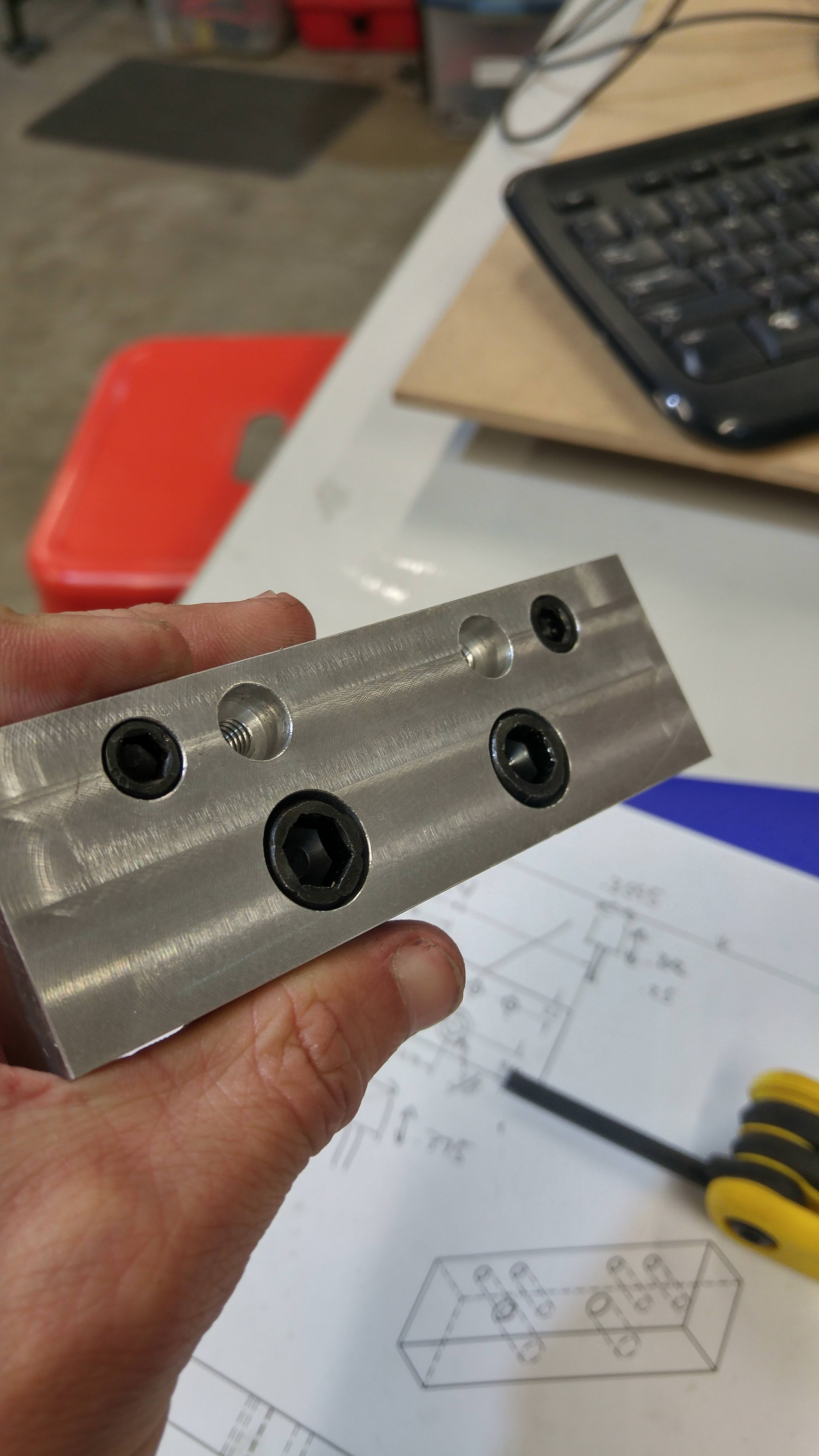 Here is me checking tolerances, right on the dot: 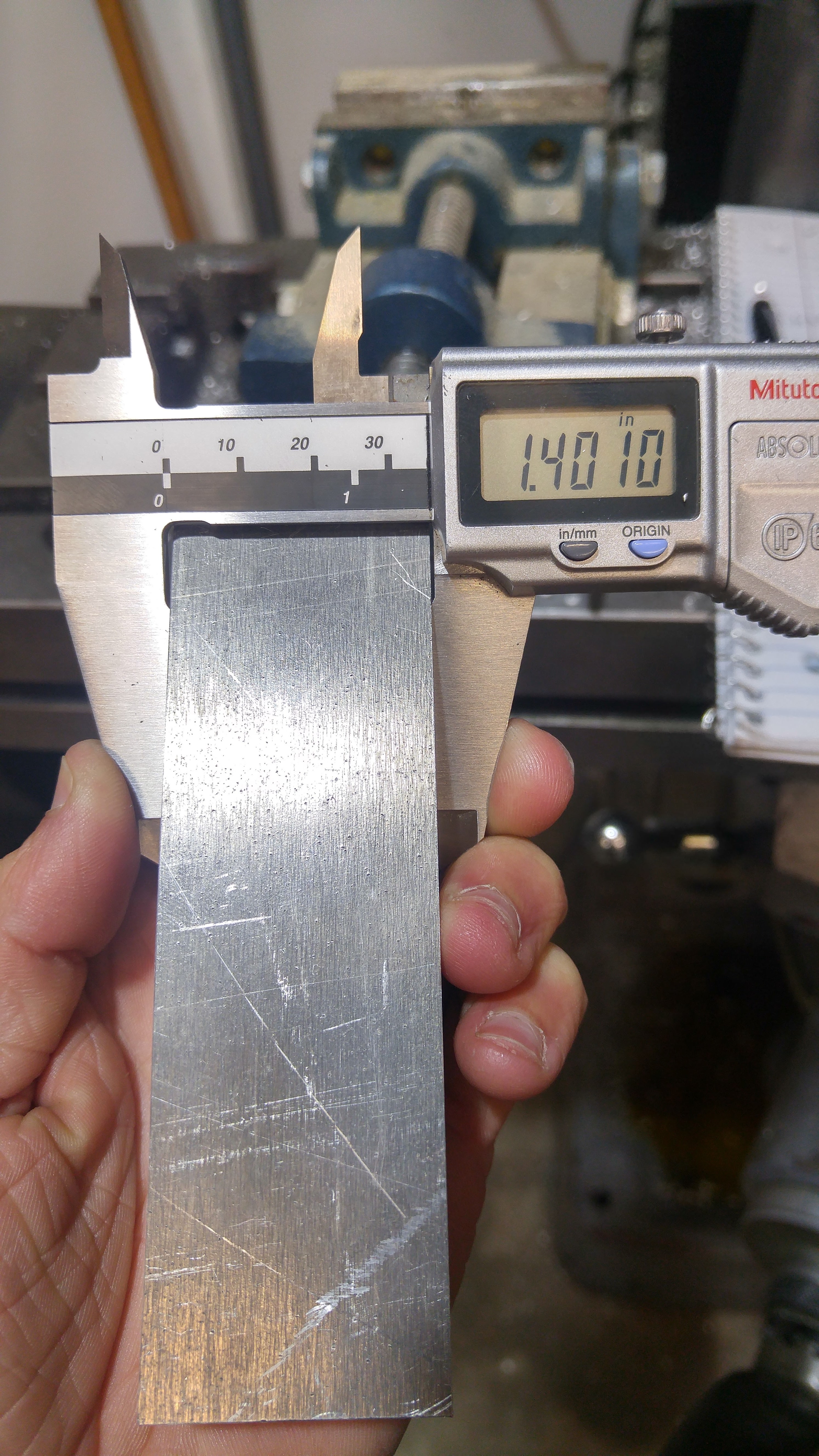 Formula SAE (FSAE) is a collegiate engineering design competition where 120 teams with 2,470 students from around the world design, manufacture and compete with a single-seat race car. My position was to create the hub and upright parts for the suspension system using advanced parametric modeling, computer simulations, and CNC manufacturing processes to help refine the hub and upright system.

The projects goal was to restore a stock 50cc two stroke moped and transform it into a more sleek and efficient cafe style bike. The moped that was chosen was a 1986 Track Hawk/Sprinter. The entire moped was torn down to the bare frame where it and all of the parts were stripped of all paint and then repainted, gas tank had a dent and was repaired with a body filling epoxy, delted oil injection system and replaced with a pre mix, new fuel line and filter, indicator delete, weight reduction, expansion chamber, low profile handlebars, and refurbished carburetor. After all modifications the moped was lighter, better looking, and capable of slightly over 30mph.

The main goals of this project were to design, build, and test a one sixth scale SAE Baja frame. We were able to choose any material to build the frame out of as long as it met specific rules and guidelines implemented by SAE. My team then developed a CAD model of the frame and ran computer simulations to test for structural rigidity and deflection. The frame was then built to scale from the materials that were chosen by the team. Teams then competed against each other and judged in three categories, Structural rigidity, Weight, and Design.

The goal of this project was to build a personal computer to be able to create and render CAD models under a specified budget. The specs of the PC are as follows, Motherboard is a ASRock Z97 Extreme4 ATX LGA1150, CPU I5 4440 at 3.2 Ghz with a Cooler Master Hyper 212 Evo cooling tower, 24GB of RAM, Gigabyte GeForce GTX 970 Video Card, 2TB hard drive, 1TB hard drive, 500gb SS hard drive, Corsair CX600 semi modular power supply, all housed in a Fractal R4 case. Total project cost with peripherals was under the maximum budget.

The goal of the class was to be able to understand the basics, create simple to realistic simulations, and grasp the capabilities of CFD simulation software. My main project was to construct a simulation of how a simple carburetor used a differential in pressure to pull fuel out of the bowl and through the jet to atomize it. Calculations for exit speed out of the jet and intake air speed were calculated by hand and used as inputs for the simulation. Other projects in the class encompased how to obtain reasonable and usable data to support theories and calculations.

I took it upon myself to begin to learn how to weld with a TIG welder. The project began with welding mild steel bars to one another and grasping the concept of how to hold the tungsten and filler rod. Next was learning how to lay down a bead of weld and push it along the line that needed to be welded. After that was accomplished it was a matter of constant practice to be able to lay a good bead and not push too much heat into the material. The next goal of this project is to begin to learn how to weld coped tubes and angled pieces.

The goal of this project was to creat a profile of a image in PTC Creo and then write the G&N code for it to be CNC machined. The image was constrained to a 5inch by 5inch by 1inch block of plastic and was required to have four holes drilled in each corner along with the image being encompassed by a circle. Once the G-Code was written it was ran through a test program to check for errors and tool path faults. Then the CNC machine was set up, zeroed, and ran by the student. Results were not as expected, tooling that was provided was incorrect, leveling bars were not level, and feed speeds and spindle RPM were not changable.